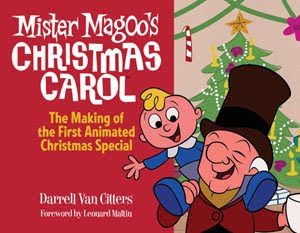 [As Didier so often points out, books that may not seem directly related to Disney history sometime reveal an interesting piece of the Disney history puzzle. Darrell Van Citters has written an excellent book entitled "Mister Magoo's Christmas Carol: the Making of the First Animated Christmas Special". The first edition immediately sold out last year and just in time for the holidays is a smaller printing second edition.

Among the Disney revelations is that Walt himself encouraged Producer Lee Orgel's idea to do the animated special and then called him on the night of the premiere in 1962 to rave about the results. How did Walt know Orgel? Another revelation in the book is that when Walt needed silent movies to run in the Main Street Cinema at Disneyland when it opened, he contacted Orgel who was working at Sterling Television and selling cartoons and silent films to independent tv stations to provide them.

Of course, other Disney related personnel worked on the Magoo special from voice artists like Paul Frees (Ludwig von Drake, Ghost Host) and Royal Dano (the voice of Mr. Lincoln at Disneyland) to former Disney artists like Tony Rivera, Dick Ung, Gerry Geronimi (who doesn't receive credit in the film but apparently directed the song "Alone in the World"--another new fact I learned in the book) and more.]
Posted by Didier Ghez at 12:36 AM