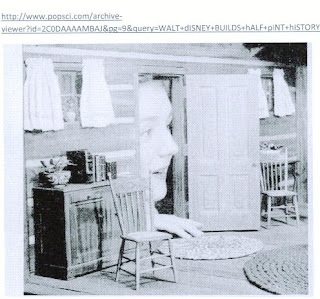 This just in from Jim Korkis: [Just because I wrote about Walt Disney's love of miniatures in The Vault of Walt doesn't mean I stopped researching that topic (or any of the other topics I included in the book). Here is something I just ran across. It is an article from the February 1953 issue of Popular Science magazine and yes, that is Kathryn "Alice in Wonderland" Beaumont sticking her head into the Granny Kincaid Cabin that Walt personally built for his Disneylandia project. The cabin was exhibited at the Festival of California Living at the Pan Pacific Auditorium in Los Angeles from November 28 to December 7, 1952. A press release announced that it represented the beginning of Walt’s new miniature Americana exhibit, entitled “Disneylandia.” I suspect since this article appeared roughly two months later that these photos are publicity shots from that exhibition.] 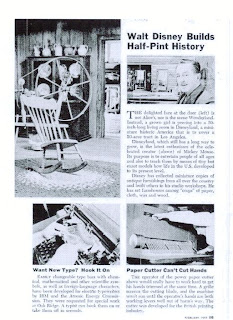