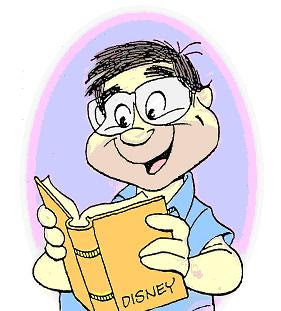 As promised, here is an interview with Jim Korkis about his exciting new book: The Vault of Walt.


Didier Ghez: Can you tell us about the genesis of the project?

Jim Korkis: People including you have constantly been asking me to compile some of my articles into a book for a variety of reasons. Whenever I did a presentation or whenever someone read something I had written that they especially liked, the question kept coming up, "When are you going to write a book about Disney?" Since I have an extensive library of Disney books (but not quite as large as yours, Didier), I wanted to make sure that I didn't do "just another Disney book" but produce something that was different from the many wonderful Disney books already out there. It is sort of a Disney history companion.

I was having lunch with Chad Emerson who had recently released his book, Project Future, and he mentioned he was interested in publishing other authors and wondered if I had any ideas for a book. I had a lot of ideas and we settled very quickly on an idea that would cover the primary areas of interest of Disney fans: stories about Walt, stories about the Disney films, stories about the Disney theme parks and then stories that were intriguing but didn't fit comfortably into any of those other three sections. Chad and I worked very closely on all aspects of the book over the last few months from the contents to the design to the marketing.

I will be honest that I thought it would be "found money" since I assumed I would just take some of my previously published articles, do a little light rewriting and then send them off. After all, when I first wrote those columns I spent long hours, often months or years, tracking down and confirming information and finding material that had never been published before anywhere. Since they were historical, how many changes could there possibly be? Well, it turned out that I extensively rewrote every single chapter. In the time since their first publication, I had run across additional information, had access to other interviews, had gotten feedback from readers with corrections and in some cases been contacted directly by people who had some involvement in the topic. If I had just done cut and paste, the book would have been fine and could have come out months ago. However, I felt that if I were committing these untold stories to print, I wanted it to be as complete and accurate as possible. No one else has told these stories before and probably won't again. This was the one chance to get it right for future researchers.

To be honest, it was exciting for me to "re-look" at some of these topics and enlarge on what I had originally written. The sad thing, of course, is that after the final galleys were approved, I ran across a few more gems that could have been sprinkled into the stories. Nothing vital but just interesting that no matter how intensively I did research, something new would pop up to taunt me for not finding it earlier. It is one of the writer's many curses.

DG: What were the most surpising or interesting sources of inforamtion you used to write this book?

JK: I think the most important source, especially in the stories relating directly to Walt himself, was the generosity and support of Diane Disney Miller, Walt's eldest daughter. Diane is an amazing woman. She is sharp minded, strongly opinionated and passionate that Walt's true story gets told. I would say her enthusiasm for my articles and her openly sharing some of her private memories was an amazing blessing. She is very classy and her actions and achievements truly honor the memory of her father and mother. She read the columns, made suggestions, shared some thoughts and gave me a greater perspective of Walt as a son, husband, father and friend. I am still flattered and stunned that she feels I have done a good job trying to capture her dad's personality. Again, I am still flustered with awe when I hear from her and am always grateful that she takes the time to do so.

I have always depended upon rarely seen, out of the ordinary documents (newspaper articles, personal letters, memos, etc.) especially from the time period I am writing about to get as close as I could to the true story. Tracking down these obscure items was like opening an ancient tomb and finding lost treasures whether it was the story treatment for Alice in Wonderland by Aldous Huxley or a news article of why Walt was being sued for the story of the cartoon Mickey"s Polo Team or a forgotten 1933 interview with Walt where he talks about how even he never thought that the Three Little Pigs was going to be anything more than a typical Silly Symphony. There are a lot of misleading if not outright incorrect information out there that keeps getting repeated in other books and articles. It is important to try to go to the primary sources as much as possible. In addition, for over thirty years I have been interviewing Imagineers, animators, people who worked with Walt and more and fortunately, I asked questions that no one else ever asked them. I uncovered some things about Walt Disney that even Diane never knew.

When I do podcasts for Disney expert Lou Mongello (http://www.wdwradio.com/), he always tells his audience that "these are the stories only Jim Korkis knows". That is both flattering and frightening. I don't want to take these stories to the grave with me. I want others to enjoy them. Disney history is like a giant jigsaw puzzle. Lots of people have different pieces. I feel if I share my pieces then people get a better idea of the whole picture and maybe it helps make their puzzle piece make greater sense.

DG: What were some of the most astonishing discoveries you made while writing the book?

JK: There are astonishing discoveries on every page. Every page. From the fact that actor Dick Van Dyke would bring a cigarette and a cup of coffee to the chimp he was working with on Lt. Robin Crusoe U.S.N. every morning to Walt's passion for a pulp magazine hero called "The Gray Seal" and that he would physically act out the adventures in his office to the fact that Walt wanted to include "smells" into the Hall of Presidents (one of the examples was the smell of gunpowder during a Civil War battle scene) to what Walt's housekeeper would really do inside his house when he was on vacation with his wife to what Frank Sinatra said to Sammy Davis Jr. after he saw Circarama on Disneyland's Opening Day. One of the few times that Sinatra was absolutely wrong, by the way, but I can understand why he felt that way.

With all the books out there, people think they know all the stories about Walt, about the films, about the attractions but I worked very hard to make sure that while the book is accessible to the casual Disney fan that there is at least one new, unknown fact on every single page for those Disney fans like me who read all the books and subscribe to all the magazines and visit all the unofficial Disney websites. I wanted to know exactly how many miniatures Walt had in his personal collection, why Walt had only one teacher who was his favorite and kept in touch with until her death, what was the full story behind Destino and Song of the South and Captain EO, why Walt selected a seventy year old grandmother to be the first Tinker Bell to fly over Disneyland. It made me smile that such important Disney writers like Leonard Maltin and Michael Barrier were so willing to write a few words of praise about my exploring the nooks and crannies of Disney history.

I tried to balance on that fine line between academic scholarship and general public enjoyment. No scandals, rumors, urban myths or psychological assumptions. Just the truth which is fascinating enough. Believe it or not.


DG: Any plans already to write a sequel?

JK: Without even breathing hard, I have enough stories for two or three more books that could be done in the same format with some stories even better than the great ones that appear in this book. Whether those ever appear will depend upon how well this book is received. In addition, I have material for other Disney related books, especially since there were several chapters cut from the book before publication. If people want a sequel then it is time for them to vote with their wallets and buy the book. Buy another copy as a Christmas gift for a friend. Buy another copy to line the bottom of your birdcage. Spread the word and let others know the book is out there. It is available now at http://www.createspace.com/ but starting October 3rd it will be available on http://www.amazon.com/ and for Kindle.
6. Are you working on any other Disney-history-related projects at the moment?

I will continue doing a weekly Disney history Wednesday column for http://www.mouseplanet.com/. Upcoming columns will include the complete story behind the little Black Centaurette Sunflower in Fantasia including what scenes were cut, who animated her and whether she had a twin sister. I interviewed the person responsible for the animated short featuring the Florida Orange Bird featuring some interesting revelations about the character and another on the lost biographies and lost Marc Davis drawings for the Country Bear Jamboree. Those will be appearing in the next three weeks and are a good example of the type of things I try to document. So maybe there will be enough material for a fourth book by the time more Vaults of Walt appear.

I write several articles every month for the weekly Japanese magazine Disney Dream Files. It is a big color, glossy weekly magazine. It features articles and topics that have never appeared in American Disney magazines. I write columns for Disney magazines like Disney Files (DVC) and Celebrations (Lou Mongello). As I am typing these answers, I am putting together a presentation on the history of the Adventurers Club for Congaloosh (http://www.congaloosh.org/) in October. How many people know that Imagineer Joe Rohde put a shrunken head Mickey Mouse behind the main bar as a "Hidden Mickey" but it was found and removed before the club opened? I do alot of freelance writing and presentations and am currently consulting on several Disney related projects by other people that unfortunately, I am not at liberty to reveal.

Of course, I also do a little work for probably the most outstanding Disney book series ever published, Walt's People. I would like to publicly thank you for your passion and persistence in publishing these important books. You've been an inspiration and a good friend, Didier. You are one of the reasons I decided to finally write a book. I hope you enjoy it.
Posted by Didier Ghez at 12:03 AM