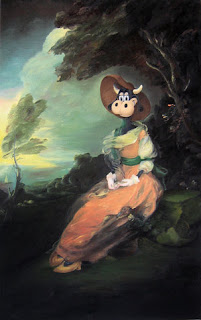 This just in through Jim Korkis:

[I wish someone could explain to me why when I am researching something on Disney history, I can never quite seem to find the information I am looking for but often stumble across something terrific about another Disney history topic. I had always heard that there were complaints from audiences about the coarseness of humor from using cow udders in Disney and Warner cartoons and so they were eliminated or minimized but I never saw any documentation other than "well, everybody knows this" kind of statement. Well, here are two paragraphs from TIME magazine (February 16, 1931) from the "Cinema" section and a short article entitled "Regulated Rodent":

Motion Picture Producers & Distributors of America last week announced that, because of complaints of many censor boards, the famed udder of the cow in the Mickey Mouse cartoons was now banned. Cows in Mickey Mouse or other cartoon pictures in the future will have small or invisible udders quite unlike the gargantuan organ whose antics of late have shocked some and convulsed other of Mickey Mouse's patrons. In a recent picture the udder, besides flying violently to left and right or stretching far out behind when the cow was in motion, heaved with its panting when the cow stood still; it also stretched, when seized, in an exaggerated way.

Already censors have dealt sternly with Mickey Mouse. He and his associates do not drink, smoke or caper suggestively. Once a Mickey Mouse cartoon was barred in Ohio because the cow read Elinor Glyn's Three Weeks. German censors ruled out another picture because "The wearing of German military helmets by an army of cats which oppose an army of mice is offensive to national dignity" (TIME, July 21). Canadian censors ruled against another brand of sound cartoon because a leering fish in it writhed up to a mermaid and slapped her on the thigh. But censorship is only a form of public testimony that Mickey Mouse and other animated cartoons are an important and permanent element of international amusement. Sergei Eisenstein, famed Russian director, has said: "They are America's most original contribution to culture. . . ."]
Posted by Didier Ghez at 1:27 AM