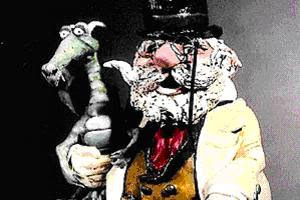 Jim Korkis shares this photo and story from his good friend, Disney expert Lou Mongello who on his very popular podcast at www.wdwradio.com captures a lot of terrific Disney history for us all to enjoy. Lou interviewed Kirk in his #30 installment many years ago and was able to record for posterity this wonderful anecdote about a statue of Professor Marvel (holding his green dragon) for the Professor Marvel's Gallery of Illusion for the planned Discovery Bay project at Disneyland being developed at Disneyland. Another example of WDI never losing a good idea but adapting it to a new situation. Check out Lou's podcast archives and you'll find some great interviews with Jim Korkis about the history of Walt Disney World.

Steve Kirk: I was in my office, we’d all been taken off of every other project except Epcot, so everyone had been reassigned from Disneyland, from Disney World, you know – Magic Kingdom and so forth – on to Epcot, and everybody was part of a pavilion. Tony was in with the Kodak folks as being potential sponsors for some kind of pavilion, and I don’t think he quite knew yet what their tie-in would be. And he ran into my office in the middle of this meeting and said “Can I borrow little Figment and Dreamfinder” – or Figment and . . . yeah, Dreamfinder at the time. And he grabbed it and took it in to them to show it to them, and he said this is the kind of character development we can do as being a host for a pavilion; maybe on Imagination. And they said “that’s great, do we get the dragon, too?” And Tony said, “Oh, yeah, yeah, yeah, yeah,” he kind of threw the dragon in as a . . . this is how I remember him telling me the story . . . The only issue was that, at the time, the dragon was painted green; Figment was green. And Kodak thought that represented a little too much of a Fuji connection, so he turned purple as a result of that.