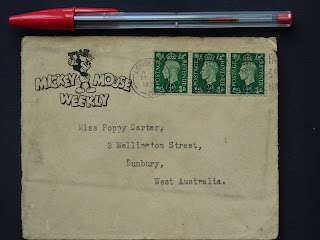 This just in from Clem in Perth (Western Australia):

[We purchased a very run-down, old house in 2006. It was owned by a little old lady, approx 80 years old in 2006 (so, she would've been born about 1925/26). She had to move to a nursing residence.
'Poppy's' story was quite tragic, and she'd become somewhat of a 'hermit'; 20 cats, no power, sewerage or water, etc, to her broken-down house. She wouldn't talk to anyone except the Real Estate Agent. She'd hoarded decades worth of rubbish, knee deep, everywhere, inside and out. We purchased the home, 'as is', including all its contents, which was mostly, literally, trash. We decided to take a bit of care in emptying the house before we demolished it, and found a few little, curious 'treasures', including these Mickey letters, inside an old dresser, which had been buried under trash over the decades.
It seems that 'Poppy' was a Mickey fan in the 1930s, and she and her mother had sent Mickey some gifts, to England. Mickey kindly responded !
We've held these letters since then.]

It is the first time I discover the letterhead of the '30s English Mickey Mouse Weekly magazine and thought you might enjoy this little treasure too. 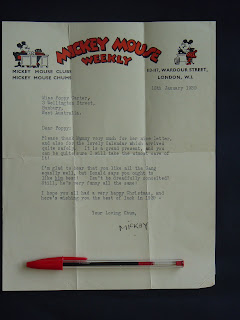 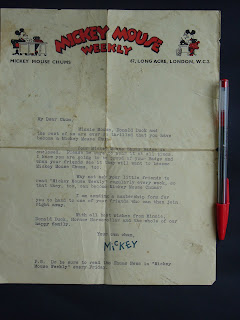 And equally rare is the reference on the letterhead to the American equivalent of the Mickey Mouse Club - the "Mickey Mouse Chums."

In over 25 years of collecting 1930s Disneyana, I have never seen this particular cachet or letterhead.

I love seeing this vintage stuff!

Thanks to Clem for sharing and to you Didier for posting the wonderful images!

Gosh!!! And people think they are doing something different and modern today with computers and pixelated comics. Take a look at those letters! Amazing!