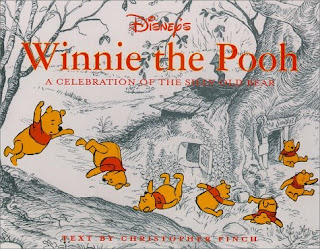 David Peake spotted in the "upcoming" section of Amazon an updated version of Christopher Finch's book about Winnie the Pooh. Here is what Christopher had to say about it:

[The Pooh book is being expanded to incorporate a chapter on the new Pooh movie to be released next year--I think in July. Officially it will be with an extra 24 pages, but I suspect there will be more. I handed my text in a few weeks ago, but the pictures went to the designer just last week and I can't imagine how he'll squeeze everything into so few pages.

I'm now working on a major update of The Art of Walt Disney due for next September.]