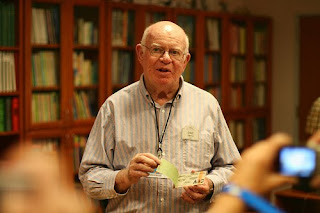 It's a massive sea change that will hit the Disney Archives by the end of this year. I mentioned last Friday the upcoming retirement of Robert Tieman. That same day, Dave Smith sent the following email:

[As you may have read in the media, after 40 years with Disney I have announced my retirement to coincide with my 70th birthday in October 2010. Of course, Disney has been a major part of my life for the past four decades, so it will be difficult tearing myself away. I am very proud of the Walt Disney Archives, which I have lovingly built up, at first by myself alone and then with the help of an ever-growing and knowledgeable staff. From a glimmer of an idea, the Archives has turned into a department which continually proves itself invaluable to The Walt Disney Company. I have been privileged to work with some of the most wonderful people in the world—my fellow employees and cast members throughout the entire Disney organization. While it will be hard saying good-bye, I am sure that I will continue to work with the Archives and D23 in my retirement. So, please do not hesitate to call upon me if I can ever be of help. I will continue coming to the office over the next four months, so it will be business as usual during that period.]

Reading this email I realized that I have known Dave for more than 20 years. The first time I met him I was 16 years old, in 1989, and after having corresponded with him for a few months was invited to visit the Archives along with my parents during a trip they had planned to California. Needless to say this was one of the highlights of my life at the time.

A few years later, on April 12, 1992, I spent a big part of the day with Dave discussing Disney history while attending the inauguration of Disneyland Paris. The day before Dave had come to our place in Paris, along with French Disney experts Michel Mandry and Sebastien Durand, and had shown us various Disney treasures from the Archives that he would present to the press the following day, including Steamboat Willie's original script!

For years, Dave and Robert have helped me with all my Disney-history related projects and have especially provided tremendous support since the start of publication of the Walt's People book series.

I have a feeling that, thankfully, neither of them will completely exit the Disney history community and that I might still be able to rely on Dave's help with re-reading and correcting Walt's People in the future. I also hope that I will have the chance to meet again Dave and Robert face to face during my next trips to the US.

In the meantime, I would like to wish Dave officially a happy retirement and good luck to Becky Cline who is taking over.

Dave, what you have built during those 40 years and what you preserved is bound to live on for many generations and to influence millions, including the most creative human beings around.

Thanks for sharing that and I couldn't agree with you more. Dave and the Archives team, as it has grown, have provided you and many other researchers with an invaluable source to enlighten the rest of us about any number of Disney topics.