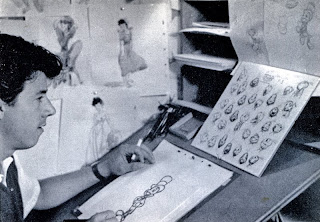 Let's suppose you were writting a book about the geniuses of the Golden Age of Disney animation: Fred Moore, Norm Ferguson, Bill Tytla, Ham Luske and Art Babbitt, what would you call it? The name needs to be both catchy and understandable by a wide audience (not just Disney historians), the way "The Nine Old Men" was.

- This book is not being written at the moment. This is purely a theoretical exercise.
- If this book were to be written, though, the names that would be suggested could definitely be used as title for the final product.

It can be naive, but they were the present wizards and founders of style of Disney films.
It would be the interesting book!

Masters of the Magic!

"The Gods of Mount Olympus"

Now for the title... I did like "Legendary Masters"... they are masters! But I do like the chapter´s names from The Illusion of Life. Maybe it could be "Cartoon Comes of Age - Appeal and Dynamics". :-D

had to add these two

The Hyperions. Or The Five Titans (Hyperion was as we know one of the twelve titans from greek mythology), or Disney's Titans.

Maybe Disney's Titans or Walt's Titans. As mentioned, there were twelve of them, six males and six females, while Walt was the Zeus of animation. Hyperion, one of the six male titans, was the studio. The other five were Moore, Ferguson, Tytla, Luske and Babbitt.