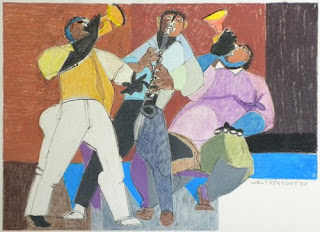 [I thought you and your audience at Disney History may be interested to learn about the latest addition to Suspended Animation Gallery, the online art collection produced by Disney animation artists, reflecting their own personal inspirations and created in their own choice of medium.

It’s Walt Peregoy, best known for his work on 101 Dalmatians, but also notable for his contributions to Peter Pan, Lady and the Tramp and Sleeping Beauty. Check out Peregoy’s personal paintings that are available for viewing (and purchase) in the gallery at this link.
Below is a press release with additional details:

THE PAINTINGS OF PEREGOY

LOS ANGELES, CA – Tenny Chonin, founder and owner of Suspended Animation Gallery, is pleased to announce the addition of paintings by Disney Legend Walt Peregoy to her collection of art available for purchase. “His paintings are exciting, colorful, and nonformulaic— a truly inspired addition to the work already on display at Suspended Animation Gallery,” remarks Chonin.

Walt Peregoy began his career at The Walt Disney Studios in 1942 at the age of seventeen, working in the animation department as an in-betweener. After serving a tour of duty in the Coast Guard and then studying art in Mexico and Paris, Peregoy returned to Disney Animation in 1951. He worked as a designer and animator on Peter Pan and Lady and the Tramp. Peregoy then served as the lead background painter on Sleeping Beauty, and he is probably best known for his outstanding color and background artistry on the 1961 animated feature, 101 Dalmatians.
His work is also featured in architectural facades at Epcot Center, and in recognition of his important role in the history of The Walt Disney Company, Peregoy was recently named a “Disney Legend.”

Peregoy is the twelfth artist currently represented in the Suspended Animation Gallery, which exclusively carries personal art pieces created by the renowned artists of Walt Disney Animation Studios. The gallery exhibits and sells original works including paintings, drawings and sculptures created by the artists who the world knows through the famous movies and characters they have helped bring to life, such as Mike Gabriel (eight films, including Oliver & Company and Pocahontas) and Lisa Keene (twelve films, including The Lion King and The Little Mermaid).

Suspended Animation Gallery presents a revolving series of works and artists, posting photos of the available pieces to its website at SuspendedAnimationGallery.com.

Original pieces can be viewed in-person by appointment. For more information on
Suspended Animation Gallery, or to view the collection of artwork available for sale, please
visit SuspendedAnimationGallery.com]
Posted by Didier Ghez at 12:40 AM