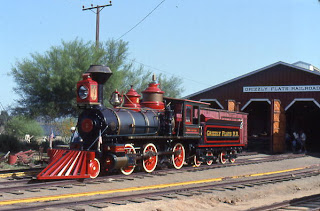 I was working this weekend on an interview of special effect animator Dan MacManus by John Culhane from 1972 that was recently transcribed for Walt's People by Robert Kolakowski.

The interview contains quite a few jewels, including the fact that MacManus was actually Mexican, but the two pieces of information that particularly caught my attention were the fact that MacManus mentions that he directed a movie called The Imperfect Crime (a 45-minute mystery) and that he stared in a Western parody, called Grizzly Gulch, directed by Carl Fallberg and Lars Calonius. That movie featured many Disney artists and was partly filmed at Ward Kimball's Grizzly Flats. Since we know that the Grizzly Flats railroad started operations in 1938 and that the movie was filmed before WWII (see CartoonBrew), we can deduct that it was shot around 1939. It lasted 1 hour and fifteen minutes.

Apparently only one copy of the movie survived and for reasons linked to rights we are unlikely to see it anytime soon.
Posted by Didier Ghez at 12:16 AM