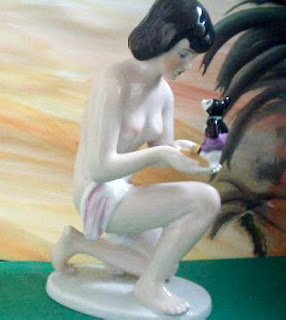 Bob Cowan was kind enough to send me this picture of a very unusual German item from his collection. The original seller wrote the following explaination (I have tried to correct the broken English):

[In 1929 comes in your country (Germany) the movie "Steamboat Willie" in black and white. It was a big success. In September of the same year the Mouse was produced by 3 different factories in Germany WITHOUT license. The 3 factories were SCHNEIDER, Leube, and WKC. All these 3 factories were in the middle of the Thuringian Forest, the area where I live. Nobody had seen Mickey in color, so the 3 factory made the mouse in black and white and in lilac and green clothes. This was the early mouse.

Around 1931 the Disney license was given in your country to Borgfeldt. Now it was forbidden to produce the mouse WITHOUT license.

The story goes on: In the Schneider factory a lot of art deco figurines were produced: bathing beauties and half dolls. Now a worker made a JOKE. He has given this naked "Snow White" the Mickey in her hand. He only made a total of 5 of this figurines, but the other are now missing after such a long time. This figurine was NEVER, NEVER in official production. OH GOD, Disney would have had heartbreak, if he had seen his cute mouse in the hand of a naked girl.

I have purchased the last 2 figurines around 1-1/2 years ago from nephew of this worker that made this joke. ]
Posted by Didier Ghez at 12:37 AM