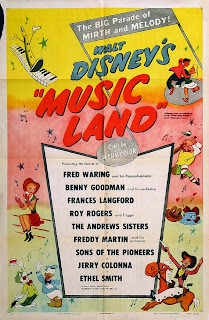 The little known final compilation film, Music Land, was released October 5, 1955. Disney had created its own company to release its films to theaters but still owed its current distributor, RKO, one more film under the existing contract. In order to fulfill that final film commitment, Disney took a combination of four sequences from Make Mine Music and five from Melody Time to create a new compilation film entitled Music Land. The poster boldly declared it was “The Big Parade of Mirth and Melody!” The film was never shown again except once at a retrospective “Tribute to Walt Disney” at the National Film Theater in 1970. The film contatined the following sequences: Trees, All The Cats Join In, After You’ve Gone, Once Upon a Wintertime, Pecos Bill, Johnny Fedora and Alice Bluebonnet, Bumble Boogie, Casey At the Bat, Blame It On the Samba.]
Posted by Didier Ghez at 1:26 AM