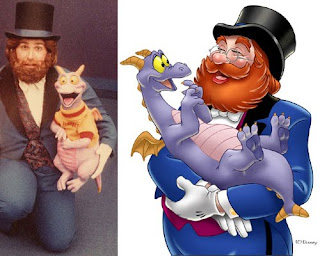 This just in from Jim Korkis (full disclosure: Jim Korkis is a member of Friends of Figment and the organization is contacting Imagineers to rally support for the return of the character of Dreamfinder to Epcot.)

[When Epcot Center opened in 1982 the characters of Dreamfinder and his little purple dragon Figment were iconic to the park. Not only did they appear on merchandise and in an attraction but there was a walk around character Dreamfinder who manipulated a puppet Figment to the delight of many guests. However almost a decade later, the character of Dreamfinder disappeared suddenly from the park without warning.

On Wednesday March 10th, at The Walt Disney Company annual meeting in San Antonio, Mike from the Friends of Figment organization made a long and impassioned plea to CEO Bob Iger to restore the character of Dreamfinder.Here is Mr. Iger's response:"I do not in any way want to get your hopes up, but the one thing that I will promise you is: I’ll have a discussion with the Imagineers, and see whether there is any real interest there. ... And, I don’t think that our entertainment offering suffers all that much by not supporting Dreamfinder, but given the fact that you are so interested in it; I feel obligated to at least ask the question, which I’ll do when we get back to Burbank."]

how exciting! I might finally be able to see Dreamfinder for myself if this goes through!