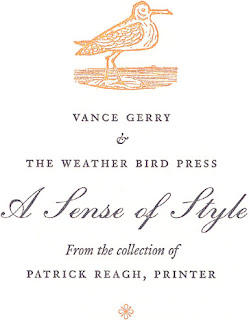 I still don't know if the autobiography of Roy Williams exists. While investigating the matter however, I realized that there is a third book that was definitely written by Roy Williams and that I forgot to mention on Monday. It's named Vaporisms and is a selection of aphorisms by Roy about death. Circulation: 50 copies.

What makes book interesting is that it was released by a company started by Disney story artists Vance Gerry, called The Weather Bird Press. While investigating that lead, I stumbled about a good interview with Vance Gerry that some of you will enjoy. Did you realize that aside from a book by Roy Williams, Vance also released books by Disney artists Tony Rizzo and Walt Stanchfield? This came as news to me.
Posted by Didier Ghez at 5:23 AM