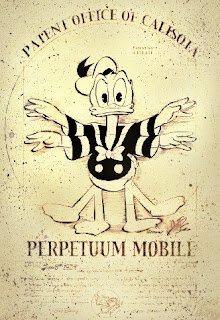 This just in from Tor Odemark:

[We have been working for 1,5 years now with an exhibition, inviting cartoonists from all over the world to send us a drawing of Donald the way they see him at the age of 75. The list has become quite impressive, as you may see, ages rangesfrom 24 to 91, 6 out of 7 continents are represented etc. The last one we received was from legendary Joe Kubert! So please enjoy the list for awhile, and I'll pick you up at the end of it...

The exhibit is going to be displayed at Villa Fridheim - an adventure story museum - all summer, before being sent around Norway, to begin with.

If you take a look at Tayo Fatunla's blog, you'll get an idea what we have been working on.

This is only to give you a vague idea that we had a tiny idea over here in Norway in September of 2008, that turned into something so far beyond our wildest ecspectations. Personally I have dreamed about having Al Williamson as the final part of this, but I haven't found a way to reach him.]

Woww!! Donald Duck is always my favorite Disney character!! And I'd really love to participate with the other cartoonists. Is it possible?

That should still be possible, as we are awaiting 3 legends to turn in their tribute to Donald - Willie Ito, Floyd Norman and Mort Walker!

That would be cool! How could I send my tribute?

I wrote a message to you on your email, Yulian - please let me know if you got it.

I got it, Tor.
Dear Didier, sorry for I wrote here asking about participating in Donald's celebration.