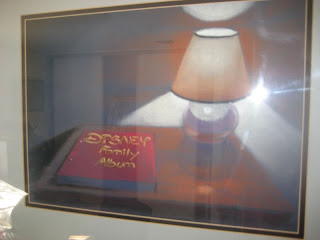 [The original concept drawing of the opening for the Disney Channel series Disney Family Album by John Lasseter in 1984. It is framed and hanging in the office of Mike Bonifer who was the co-producer of the series. Lasseter became involved with the projects because he was friends with the co-producers Cardon Walker (son of Card Walker) and Mike Bonifer. They had a shoestring budget and had to call in favors from friends, like John Debney who composed the music for the show.

This was of the last projects Lasseter did before moving to Lucasfilm’s Industrial Light and Magic (for a month that became six months and then later a career when the department was purchased by Steven Jobs and renamed Pixar) was the title sequence for Disney Family Album.
“Lasseter wanted to make the titles in CG,” remembered Bonifer. “That’s one of the reasons he got involved in the project. Everything was CG with him. He had just done the Where the Wild Things Are test with Glen Keane where he told me that using the computer was the only way to get the cross-hatching of Sendak’s original drawings and was on the prowl for anything that he could do in computer animation. He was a friend of ours. We used an outside post production facility. I think it was Pacific Post. We just didn’t have access there to vector graphics. It was just analog. When the album graphic opened, we could not get the spine to stay together. It would float apart. John did the original art but then he left to go up North for his dream job. Brian McEntee (who would become a layout artist and art director on several animated films). came to the rescue and finished it up for us. John and I were so frustrated working on those opening titles that we were literally about to cry. I think he learned from the experience to never go near analog tools ever again. I don’t blame him for leaving. He was following his passion.”]

"I don’t blame him for leaving. He was following his passion.”

For the record, John Lasseter was fired from Disney. Happenstance brought him to Lucasfilm.