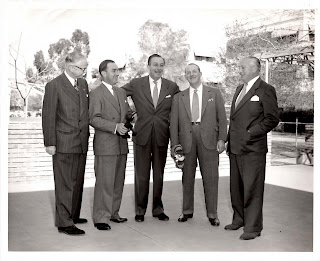 Greg Ehrbar, James D. Marks and I have been working on and off for the past 2 years on the autobiography of the late Jimmy Johnson (head for several decades of the Walt Disney Music Company), our goal being to see it released in book format at some point in 2011.

Since Johnson had the opportunity to work with most of Disney's offices overseas, reading his autobiography introduced us to several Disney "characters" based abroad and who were instrumental in building the company outside of the US.

Some of those executives (like Cyril James, for example) have been named Disney Legends in 1997, others are still mostly unknown.

I had the pleasure of being in touch with the family of Eddie Davis, who sent me various photographs of Eddie with Walt, Roy and a few others that I will be posting on the blog this week (in the above photo, Eddie is at the far right).

Here is what Jimmy had to say in his book about Eddie when he described his 1947 trip to Europe:

[The Disney London office was run in those days by two men: Eddie Davis, who was in charge of merchandising and publishing, and Cyril James, who headed up everything else. Cyril was Roy’s eyes and ears in England and Europe.
Eddie Davis was as much the dean of Character merchandising in the U.K. as Kay Kamen was in the U.S. I once made the rounds of the English Toy Fair with Eddie at ten o’clock on a dreary London morning. ]

Apparently Davis joined Disney in 1933, became Advertising Manager Film Trade in 1936 and Assistant Manager Cinematograph Trade in 1936/37. In the '40s he was in charge of Merchandising for the UK, then (after 1947) became Managing Director of Walt Disney Productions for the UK and Europe.

I think you mean "Biography".

No, I do mean autobiography. The book was written about 35 years ago by Jimmy himself.