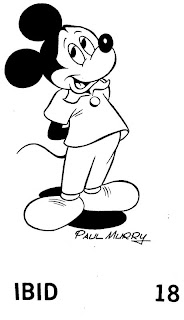 [Back in the late Sixties and early Seventies, two friends named Wayne DeWald and Gary Brown would track down comic book and comic strip artists like C.C. Beck, Al Williamson, Don Martin, Hal Foster and write to them. DeWald and Brown were both members of an apa (amateur press alliance--where each member published a pre-determined number of his own contribution and sends it to a central mailer who picks out one copy from each stack of submissions puts them together in one magazine and sends it back to each member) named CAPA-Alpha (the first comics apa) and would share some of the information they got from these artists. Occasionally, the artists would also do free original art for them. DeWald tracked down Paul Murry who had been an animator at the Disney Studios but went on to greater fame as an artist for the DELL/GOLD KEY comic books, in particular the Mickey Mouse serials in the back of WALT DISNEY COMICS AND STORIES. Murry had been an assistant to Freddy Moore at Disney.

I recently got in touch with DeWald and Brown to ask about Paul Murry. DeWald wrote: “In Murry’s case, I don't know if I wrote him via Gold Key comics or what. In those days I regularly wrote letters to just about every artist I could think of, usually getting at least a note in response. To the best of my recollection I think we were in touch about 1968-1970. He did four or five illustrations for me of Mickey Mouse, Pluto and Goofy and those are also gone although my good friend Gary Brown still has two of the Mickey Mouse ones that he used for his K-a apa zine, “Ibid”. All the artwork Murry did (for free) was done in India ink and it was on art board. My overwhelming recollection is what a nice guy Murry was and how eager he was to talk about his animation days."

With Gary Brown's permission, here are the two Mickey Mouse drawings by Murry that he ran on his K-a zine in 1970 that he said could be shared with Disney fans. K-a had less than 50 members so less than 50 people originally saw this artwork.] 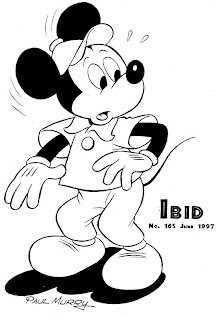