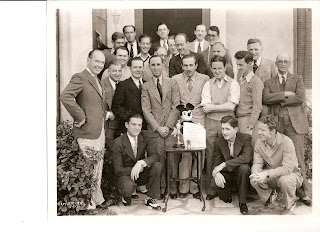 This photo was sent to me recently by the granddaughter of Helen Hennesy. Not certain when it was taken.

[UPDATE FROM DON PERI: From my Ben Sharpsteen interviews:

"This large group of men [is] grouped around a Mickey Mouse celebrating or commemorating the first Oscar that was won by the studio. This group was selected as perhaps being key contributors in the creative production of the studio."

Rest of second row to the right of Walt, Norman Ferguson, Dick Lundy, and Emil Flohri. ]

My guess is November 1932 or very soon thereafter, and here is a post on my blog, which leads me to this conclusion:

They're posing with the Special Oscar for Mickey on or about November 21, 1932 at the Hyperion Studio.

Congratulations on your interview on the WDF Museum Didier! I particularly liked your second answer, very well put!

In the posting of this image that I put up three years ago, I also added a copy of it with the names of the people, in the hope that they might be easier identified. This was definitely the key group of artists. Thanks, Jeff, for supplying us with a date!