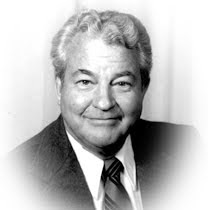 [Bill Justice is getting ready to celebrate his 96th Birthday February 9th, but he’s been in a rehabilitation home for the last few years and visitation has been tightly restricted. A good friend of mine who is a talented Disney artist recently visited him and said Bill had difficulty remembering recent events but if the artist mentioned a name from the "Golden Age" of Disney, Bill perked up and his memories were clear as a bell.

Bill hasn't been in the best of spirits so it has been requested that it would be nice for him to get some holidays cards and of course, some birthday cards, to let him know that he hasn't been forgotten.

My interview with Bill appears in Walt's People Vol. 3.

For those unfamiliar with Bill's many accomplishments, he is probably best known for his animation on the characters Chip'n'Dale and for his early work programming audio-animatronics on such attractions as "Pirates of the Caribbean" and "Haunted Mansion". He was the one who designed the recently closed attraction, the "Mickey Mouse Revue" and painted the huge mural of characters in Exposition Hall at Walt Disney World. Basically, his accomplishments were enough to fill a book...and they did in the limited edition "Justice for Disney" book he authored and that was released by Tomarts Publications.

Bill has been a long time friend of the Disney fan community and has attended many conventions, cruise ship excursions, and other events often drawing Disney characters on paper plates and then tossing them like frisbees into the crowd.

It is being requested that Disney fans show their love by sending him a card or letter (remember that he won't be able to respond or fill a request for artwork) and perhaps include a photo that may have been taken with him. Something to remind him of his impact and how he is still very much loved and appreciated.

Bill is one of the few remaining connections to people who actually worked with Walt and Bill's contributions include not just animation but work at the Disney theme parks.