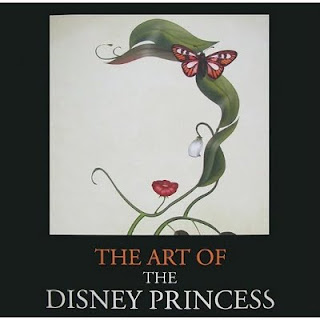 One of the three books I received from Disney Editions a few days ago is called The Art of the Disney Princess. The idea of this book is similar to what was done in The Art of Mickey Mouse and The Art of Winnie the Pooh: Disney Artists Celebrate the Silly Old Bear. To be honnest, I always found those books slightly pointless. But there is always something in them both to surprise and to inspire.

The Art of the Disney Princess is a case in point. Unlike the two other books I just mentioned, most of the artists in this one are unknown (or to be more precise: I had no idea who they are) and you really wonder what all the drawings have in common, save for the Princess theme. There is also a sense that the sources of inspiration or the creative methods of each of the artists should be explained on a more consistent basis (why are some of the artists quoted and not others?) If that had been the case one would hold a book that would be as much about the creative process as about totally subjective renderings of a common theme, adding strenght and a point to the overall endeavour. But that is not the case, which makes one wonder time and time again: what's the point?

But then the book surprised me as I did find quite a few pages that I liked very much. 13 creations (in a this 172-page book) did strike me as particularly noteworthy:

- Chad Sommers' cover drawing, which reminds me a bit or Archimboldo, although Sommers mentioned that he was inspired by Dali
- Pedro Armadillo's version of Aurora as a Gibson girl
- The two '60s like movie posters by Eric Tan featuring Sleeping Beauty and The Little Mermaid
- The six paintings of the princesses in an Art Nouveau, Mucha-like style: one by Dorota Kotarba-Mendez and five by Enrique Pita & Ed Irizarvy
- Belle by Maria Elena Naggi in the style of Francois Boucher's Portrait of Madame de Pompadour (I wonder what that comparison says about Belle!!)
- Snow White by Robert Farrell in the style of one of Marc Davis' paintings from the stretching room in The Haunted Mansion (by far, my favorite).

As you see, all the creations I preferred are caricatures. They are the ones which have real meaning to me and I wish a whole book of creative caricatures of famous paintings were done using Disney characters. Italian Disney artists did this in the past and the results were featured in the brillant little book released in Italy in 2001 called The Magic Gallery.

In summary: Although I feel as if I missed the point of this book I did enjoy much of it nonetheless, which did come as a surprise. If you are looking for a non-Disney-history related book that shows Disney to your friends from a different perspective, this might not be a bad one to pick-up.

If you are looking for a GREAT Disney history related book, however, wait until you read the review I will post on Monday.
Posted by Didier Ghez at 12:54 AM

Unfortunately not. It is extremely hard to find.

Delightful to be reading this right now. I'm in the home of Maria Elena Naggi, one of the illustrators featured in this new book.

I'll bet she'll be pleased to know what you think of her "Belle."