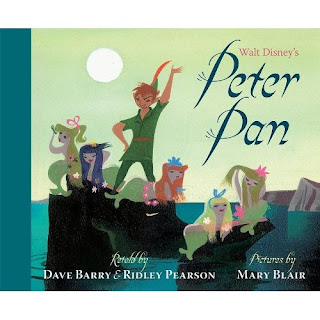 I have just received three new books from Disney Editions that I will review within the next few days. One surprised me and one is almost perfect save for a very disturbing "typo". Let's start however, with a book that did not surprise me but that I thoroughly enjoyed.

Peter Pan, illustrated by Mary Blair, follows the pattern of the Cinderella and Alice in Wonderland books from the same series. If you have those already you can easily imagine what the Peter Pan book is: a great series of 29 concept paitings by Mary Blair illustrating a short text re-telling the famous story. I really enjoy this short series, which is oddly similar to the "Disney Archives" book series from the early '90s, which featured "The Emperor's Nightingale" and "Tin Soldier".

The only unfortunate news is that Peter Pan is confirmed as being the last installment in the series. A real shame as I would really have loved to see a lot more of those short books illustrated by various legends of the Story Department. Oh well, I always want more anyway. So for now let's just enjoy this beautiful little book.
Posted by Didier Ghez at 10:54 PM