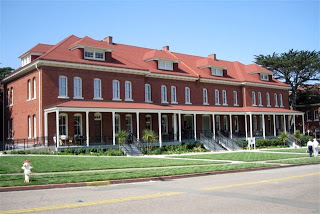 Disney History in San Francisco and around

You have already read the reviews, the reports on various Disney-related blogs and seen the images on Flickr and on YouTube [If not click on this link sent me by Gunnar for YouTube content] so this story about the inauguration of the Walt Disney Family Museum will not attempt to be objective in any way, shape or form. This is the very biased report of an enthusiast who had been waiting for many years for this once-in-a-lifetime event.

Let's start by saying that I was not disappointed (on the contrary!). The Museum is without a doubt a tremendous success. It manages to humanize Walt by showing him as a caring father, a tremendously enthusiastic man even at home, and a loving husband, without shying away from the most problematic aspects of his life (the section about the strike is a case in point). Of course, Walt had been "humanized" before today in the best biographies written about him, in the movie The Man Behind the Myth, etc, but the Museum goes way further along this path, showing many beautiful home movies, simple personal artifacts, rare photos,... There was a lot that I had never seen before (and I mean a whole lot), but I consider those home movies as the key richness of the Museum. Far from the only richness, though.

The Museum is so rich, in fact, that it would be ludicrous to try and list even half of the great elements it contains. Especially since I only spent 2 hours there during the inauguration event, then another hour afterwards. This means that I did not have time to explore any of the interactive experiences that the Museum offers and that allow to dig deeper and deeper and deeper into Disney history.

But let's try and list the elements that struck me as most striking:

In the reception area, among the awards, the huge award from Italy featuring Snow White and the Seven Dwarfs fascinated me, along with Mickey on the Tortoise from Brazil which I had seen in various photos and whose story will soon be revealed by Celbi Pegoraro in his upcoming book about Disney and Brazil.

In the first few galleries, as I mentionned, I loved the home movies, but also Walt's early drawings (way more than I had ever seen before), all the photographs of his childhood and most of all the fact that his voice is telling the story (this is the case everywhere in the Museum but in this first room is where I realized how powerful this device can be). I also tremendously enjoyed the vignettes telling Walt's early days using paper cut-outs (on High Def TV screens - I will come back to this later).

On the second floor, some of the highlights include the Schultheis notebook (and the way it is presented - see below in this text), the way the Disney artists from Hyperion are presented, the fanciful recreation of the Moviola (I loved that one. While it might not be a real Moviola, it gave me a sense of what one would feel and see while using one. The first time I truly understood what the artists must have felt with Walt watching over their shoulder.)

I knew the Multiplane camera would be spectacular. It is.

Gallery 9 (the '50s and '60s) is a true fireworks with more to see everywhere than one could imagine and those beautiful movies of Walt's last trip to Canada, his Mineral King press conference,...

Suffice it to say that my wife cried in Gallery 10 when she realized that Walt had "just" died to give you an idea of how powerful the whole Museum experience is.

I was only disappointed by one aspect of the Museum: the store. Most of the products featured do not have much connection with Walt himself, the book selection is a bit underwhelming (although the books featured are truly excellent ones) and there was a feeling overall in that specific part of the Museum that nothing really special was taking place there if compared to the rest of the place. But I also have a feeling that this will soon be corrected as there was little time for the Museum team to concentrate on that specific section. The catalog of the Museum had not yet been released either (issues with the printing apparently) which of course did not help from my point of view (again, an issue the Museum staff was aware of and will be sorted soon).

Overall there are four key elements that dominate my sense of enthusiasm for the Museum:

1. The building itself is truly beautiful and the way it has been restored makes it even more stunning. This is a building which is really of the tremendous quality level you would expect for a museum about Walt.

2. A very large percentage of the documents presented are seen in this Museum for the first time ever, are of great historical value and have been selected with extreme care (by Diane, JB Kaufman, Paula Sigman Lowery, Jeff Kurtti, David Lesjak, and Bruce Gordon to name a few).

3. If you already loved Walt as a human being, radiating charm and enthusiasm, you will love him even more. If you did not know him, I have a feeling that the Museum will make you feel how special (if not perfect) a human being he was and how talented the artists who surrounded him also were.

4. The use that is made of new technologies to preserve and showcase old documents is truly outstanding: the home movies have been digitized, cleaned up and shown on HD monitors; the Schultheis notebook is presented using a huge touch-screen reminicent of the movie Minority Report or the large interactive board that was seen on CNN during the latest US presidential election,... 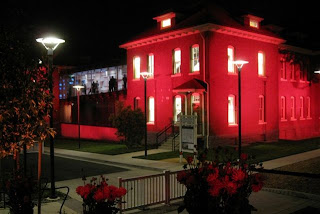 The inauguration that I attended on Friday 25th was followed by a cocktail party that was attended by several of the best Disney historians including JB Kaufman (working full time for the Walt Disney Family Foundation), David Lesjak (who heavily contributed to the WWII section of the Museum), Charles Solomon, and Jeff Kurtti, and prominent artists like Andreas Deja, Tom Sito and Pete Docter who have a strong passion for Disney history. 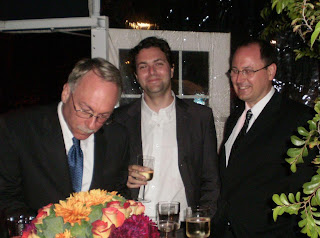 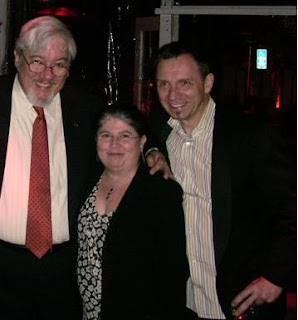 During that event Andreas mentioned that he was working on a blog. I will of course tell you all about it when it is launched.

The Walt Disney Family organized at least 5 or 6 diffent launch events before the official opening on October 1st. Some for the press, some for the Media industry (the one I attended), some for top VIPs (that Bob Iger, John Lasseter, Leonard Maltin, Tony Baxter, and others attended). 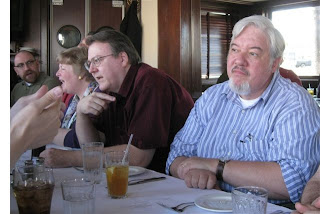 The day that followed the inauguration event quite a few Disney historians decided to gather for a lunch at the Fog City Diner. The group included people like JB Kaufman, Don Peri, Andreas Deja, Tom Sito, Alan Coats (Claude and Evie Coats' son), Joe Campana, Alexander Rannie, Stacia Martin, Hans Perk,...
Which leads me to share two dreams with you:
- I hope that the Walt Disney Family Museum will at some point become the visible part of a project focused on preserving Disney history on a wider scale.
- I also hope that the kind of lunch that happened on Satuday October 26 will be the first in a series of yearly events that will gather key Disney historians to work together on specific projects. A Disney seminar? Maybe.
We will see if 2010 brings this to us. We will wish for this at Xmas time (or in my case at Hannukah). Let's just say that I am actively promoting this concept along with a few other friends.
We spent the rest of the week at Yosemite, which although tremendously beautiful, is irrelevant in this report.
When we came back from Yosemite we had the chance to spend the night at the home of John Lounsbery's daughter, which also gave us the opportunity to meet again with Mel Shaw (and with Don Peri and his wife - who shot most of the photos that illustrate this report). Once again I was impressed by Mel's versatility. I fell in love with his sketches from South-East Asia and with his sculptures (I was already in love with his Disney concept art paintings, of course). I truly hope that we will soon be able to help him release his long-awaited autobiography.
During that part of the trip I learned that John Lounbery's grandson, Paul, is working on a website that will feature Mel's artwork. Again, I will let you know as soon as it is up and running.
2009 was a great year for Disney history. I have a feeling that 2010 will be even better.
Whatever you do, go to San Francisco as soon as possible. It is definitely worth it and I truly believe that we should support the Museum if we want our wishes for 2010 to become a reality.
My congratulations and thanks to all of you reading this blog who contributed to such a tremendous achievement. Let's work together to now go even further.
Posted by Didier Ghez at 11:38 AM

Thanks Didier,
This was really a great report !

Thanks for the report!

I can't wait to be able to spend time at the Museum.

It sounds like everything was amazing. Was there one item or display that really knocked your socks off?

Seeing the Multiplane camera and browsing through the Schultheis nootbook.

Excellent news! I look forward to everything mentioned, especially Deja's blog. That will become one of the top animation blogs in now time.

Thanks for the mention and kind comments Didier.

Working with the Miller family has been such a joy, and to share a small part of my Disney collection with those interested in Walt Disney and his Stuido has been extremely gratifying. (I can hardly wait for Paul Anderson's seminal book on the Studio and WW II!)

It was great to see you and Rita, albeit too briefly, as well as JB Kaufman and others.

My favorite, among the many dozens, was definitely the Schultheis notebook. The amount of knowledge contained in that book is amazing! What a document! And the way the book has been presented - fabulous! I only hope a book will be written one day detailing the history behind the information and techniques contained in just that one artifact.

I spent around 5 or so hours in total in the Museum and I know I missed a lot of what was on display...there is just so much.

Continued success to you on your fine blog and various projects and here is to the success of The Walt Disney Family Museum!

I went to visit the museum last week and I too loved it. It is all of what you wrote and more and I did spent 4 hours there and made sure I saw everything. Great job by Diane Disney and all involved in it and I totally recommend everyone to go see it.
I agree with you about the store, it could be much better and I hope they will work on that.
Best.

Hi Didier, Please let me know if the lunch becomes a yearly event. Next time, I will be there. I'm sorry I missed it.