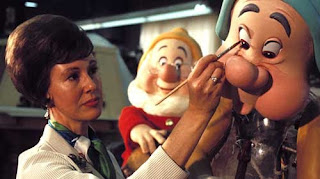 I mentioned a few days ago that 2010 would see the release of a book about Imagineer Harriet Burns, Walt Disney's First Lady of Imagineering, Harriet Burns by Pam Burns-Clair and Don Peri. Don was kind enough to answer a few questions about the book.

Didier Ghez: Can you run us through the genesis of that project?

Don Peri: After Harriet's passing in July 2008 and a memorial service held one month later, Harriet's daughter Pam received such an outpouring of love for her mother from family and friends, both personal and professional, that she decided to gather this material together into a tribute book about her mother. I came on board as a co-author and we solicited and received many more stories about Harriet and they all comprise the book, together with many photos of Harriet that will delight the readers.

DP: The range and depth of Harriet's impact on those whose lives she touched whether as a mother, grandmother, relative, mentor, co-worker, or friend. The stories will bring a smile or a tear, or both, to the reader and will contribute to an understanding and appreciation of this tiny woman with a heart as big as her native Texas.

DG: What primery sources did you use to write this book?

DP: The material for this book comes primarily from contributions made by her family, friends, and colleagues.

DP: One surprise for those who didn't know Harriet well may be her sense of humor. Despite her appearance, which was always flawless, she had a well-rounded sense of humor that could be a bit bawdy at times, perhaps due to her years of being the first woman among an all-male imagineering staff. She could shock people with her humor and she was usually spot-on with her observations. As an example, Disney Legend Rolly Crump recalls "Harriet and Fred Joerger [both Disney Legends] loved to tell jokes that were a bit off color. She loved shocking us with her own personal tales like 'dating' the entire high school football team. We never really knew which stories were true and which were meant for just shock value."

DP: The book will most likely not fall into chapters but will be a mix of accounts from her many acquaintances.

DG: What other Disney-related book projects are you currently working on?

DP: I am currently working on a second volume of interviews with Disney artists who impacted Disney films, television, and theme parks. Some of the interviews are with well-known artists and some may be rare or perhaps the only surviving interviews with some lesser known artists.
Posted by Didier Ghez at 12:58 AM

This is a must have book. Can't wait!