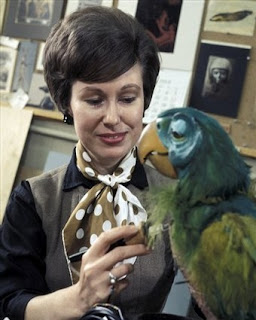 Didier Ghez: What are the most astonishing documents you uncovered while researching this book?

Pam Burns-Clair: Rather than any one document or entry having such an effect, my daughters, husband and I were rather astonished at the volume and humor of the cards and drawings from many of her colleagues that surfaced in her basement “archives”…but we were quite blown away by the vastness of her circle of dear ones! Although I had heard most of their names over the years, I didn’t realize how strongly she had impacted so many. She had promised us these relics “someday” but kept them quite private while she was alive, no doubt somewhat embarrassed by the chaos that the collective accumulation accrued over the years! My daughter was quite mystified early on by all the nicknames that appeared on the cards: “B.A or Bush Ape…Perry…Duke of Acapulco…Your Walt…” which I was able to help decode eventually, putting her at ease that all these ‘suitors’—including my dad, Bill—were “safe” and pretty amusing!

DG: What were the most fascinating testimonies you gathered about your mother for this book?

PBC: There are many “backstage” stories by her colleagues, both among the “old dogs” who go way back with her, as well as the next generation of Imagineers who took inspiration, comfort or encouragement from her. The “wacky and creative” atmosphere is even more colorful than I was aware, and Mom was at the center of much of it! There are also some precious glimpses of her past by her 2 sisters and a couple of childhood friends.

DG: What did you learn about your mother while working on this book?

PBC: She was more multi-faceted than I perceived. She presented a responsible authority image to me with high standards and moral character as I was growing up but someone who had wacky friends at work. She was also very private in certain ways. She was always very compassionate and generous towards the ‘have nots’ and humble about her own accomplishments. I came to learn she was more generous-spirited and fun loving than I ever imagined and walked a dual line of being proper and mischievous. She was held on a pedestal by so many in ways she never let on that I could only discover in this outpouring of tributes after her passing.

DG: How long will the book be and who will release it?

PBC: 112 pages, to be exact, produced by Donning Publishers, targeted for release in early 2010. In keeping with who my mom was, it will be a combination of stories and visuals—coffee table style.