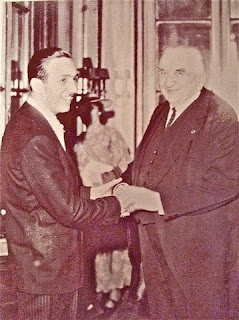 This just in from Sebastien Durand who recently visited the Lumière villa:

[1935 - The Americans, the "war of patents" having ended a while back, take advantage of the 40th birthday of the cinema to officially recognize Louis Lumière's fatherhood of the invention. During the celebration dinner, he meets and receives thanks from Walt Disney.]