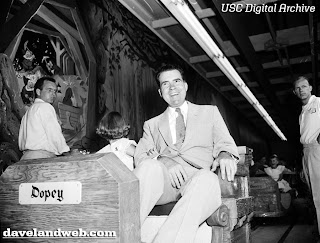 [It has been claimed that on President Nixon's historic trip to China in 1972, he took along some Disney costume characters thanks to the connections of this guy. I don't remember that being the case and I don't remember any photos of that happening (especially since it would have been pretty notable) and in my research haven't been able to track down any confirmation. The Nixon Library has no record of Disney characters accompanying Nixon but libraries don't always have all the information. So, can anyone supply information whether Disney costumed characters accompanied Nixon to China in 1972? I am trying to help out a friend on this project.]

Can anybody help?
Posted by Didier Ghez at 1:02 AM

The opera, NIXON IN CHINA by John Adams, would most certainly have exploited the idea of Disney characters on parade had it actually happened. I haven't heard any such thing, and I was paying attention back then.

For what it's worth, I don't remember this happening, because if it had, I would have remembered it.

I was a major foreign policy wonk AND a Disney geek (that's a rare intersection of interests) and if something like that got much publicity it I think it would have registered.