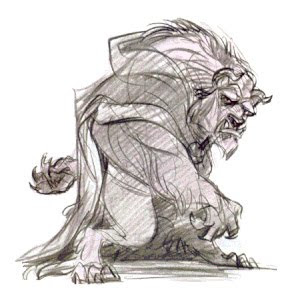 One of the books I am really looking forward to is Tales As Old As Time (The Art of Beauty and the Beast) by Charles Solomon that will be released early next year. Read the following interview to find our why.

Didier Ghez: Bob Thomas already wrote a Making of Beauty and the Beast (as part of one of his Disney's Art of Animation books). What will be new / different in your book?

Charles Solomon: Bob Thomas devoted about one-third of the 1991 reissue of his classic The Art of Animation to Beauty and the Beast, but his space was limited. That edition was not in print very long, as it was replaced by the one devoted to Hercules in 1997. As I have more space, I've been able to go into more detail about how the film evolved, including some false turns and discarded ideas.

DG: Why did you decide to work on that book? Can you run us through the genesis of that project?

CS: My initial reaction was that there have already been too many books that tell readers too little about how a film actually gets made: they present a rosy scenario in which everyone has only good ideas, the artists all get along, and the project sails through production. Don Hahn, who suggested doing the book, promised that would tell the real story of making Beauty and the Beast, which was an interesting challenge.

CS: Hans Bacher had trove of his beautiful drawings which he made available to us, and Glen Keane allowed us to photograph pages from one of his sketchbooks. The ever-helpful staff of the Animation Research Library found storyboard drawings that show the evolution of various ideas: e.g. "Be Our Guest" was originally sung to Maurice, rather than Belle, and we're able to juxtapose the boards from the two versions.

DG: To write this book did you conduct a whole new set of interviews with Disney artists?

CS: While I had extensive interviews with many of the artists from pieces I wrote when Beauty and the Beast was released, I talked to as many of the artists as time allowed. Everyone I contacted was extremely generous with their time, and it was interesting to hear how they looked back on their experiences. Nearly everyone said, "We were kids working on that film!" Even executives as busy as Dick Cook and Jeffrey Katzenberg made time to speak with me.

CS: Not many people know Beauty and the Beast was originally going to be produced in London and that it was going to be a darker, more conventional retelling of the story with no songs. I was able include an account of that version of the film with artwork, and discuss how and why it was changed.

CS: The 10 chapters trace development of the film from the origins of the story, through the Imax and 3D re-releases of the film.

CS: One interesting thing I discovered is that Beauty and the Beast is one of the most widespread of all fairy tales or legends. Versions exist all over the world and can be traced back to The Golden Ass, the second century novel of Lucius Apuleius, and the story wasn't new then. It had already been filmed at least 30 times before the Disney artists tackled it. The earliest known film is a French version by Pathé Fréres from 1899.

DG: What other Disney -related book projects are you currently working on?

CS: I'm finishing a book on the making of Toy Story 3 for Disney-Pixar, which will also be out next year.

It probably is going to be very interesting, though I do think this is one of the studio’s poorest movies, full of off-model animation (Belle), poorly conceived and animated characters (Gaston and Lefou), vulgar touches (the « Bimbettes ») and bland backgrounds. The Oscar nomination was more the result of the studio’s impressive PR campaign than that of the film’s own (few) merits.

Solomon is a good author, but all of Walt’s movies (even the package features of the 40s) are more deserving of such a tribute than this one.

Still, interesting, if only to see how such a failure happened.

I think maybe a few million people just might have another opinion of the film, Lionel.

Of course, everyone is entitled to their view of the film, and that's okay. In my case, when I first saw the film, I was totally blown away.

And, this is coming from a guy who worked with the "Old Man."

Well, Floyd, I respectfully disagree : I never worked with Walt Disney, but there still is nothing I like in "Beauty and the Beast".

That doesn't prevent me from liking a lot of movies from the current generation : Mermaid, Rescuers Down Under, Aladdin, Pocahontas, Hercules, and even Treasure Planet, which I hope will one day be recognized as the masterpiece I think it is.

So I'm indeed just voicing my (somewhat) argumented opinion, which is what it is, only mine. And I'm not attacking any one, certainly not the artists who worked on the movie, who have all done great other things.