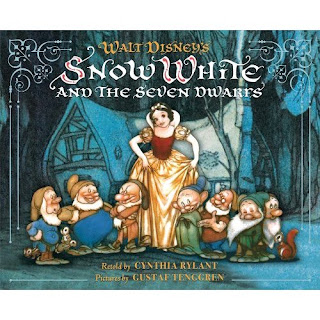 I received yesterday review copies of 4 new books from Disney Editions. One is nice, one is very good and one is simply put spectacular. I will review one book per day during the upcoming few days, leaving the best for the end. Let me start with the only book that proved to be a disappointment:

Walt Disney's Snow White and the Seven Dwarfs illustrated by Tenggren is definitely not a very good book. If you have the Cinderella and Alice in Wonderland books illustrated by Mary Blair, you know what the format and concept of this book looks like. It worked well with Mary Blair and made those previous two books "nice-to-have" if not necessarily "must-have". (And I look forward to Peter Pan that will be released at the end of October).

Unfortunately, for some reason, the Tenggren book is not up to par: it seems to contain a bit less artwork, but most of all the quality of the reproductions is problematic to say the least. Since the book is relatively cheap it might be a good idea to get it if only to have all of those Tenggren illustrations easily available in one place, but that's about all I can say in the book's favor.

Thankfully, Disney Editions has other great suprises for us in store before Christmas, which I will cover in details tomorrow and especially next week (I will be travelling on Thursday and Friday this week).
Posted by Didier Ghez at 1:40 AM