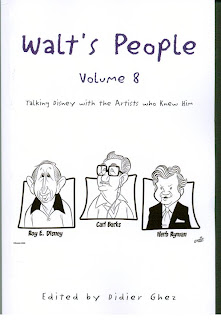 I have just received my review copy of Walt's People - Volume 8 and returned the signed approval form to Xlibris. What this means is that Volume 8 will officially be released between tomorrow and Friday on Xlibris and should appear on Amazon in about 4 to 8 weeks.

It is a massive 451-page long. I really went overboard this time!

To celebrate, let me offer you below the introduction I wrote for this volume.

[Disney history can be compared to the exploration of a creative universe, whose center is Walt and whose countless planets are the creative worlds of the artists that surrounded him or were inspired by him.
I have often pictured myself as visiting each of those planets, one by one, in a Star Trek-like quest. The best way to undertake this exploration is through first-hand testimonies and documents about those various creative worlds. Interviews, autobiographical notes, story-meeting notes, creative memos, concept art, storyboard drawings, photographs, and video footage are the key vessels that allow us to discover those worlds. Disney historians, collectors, and the artists’ heirs are the main guardians of this historical wealth. Which explains the waves of happiness that strike me each time I manage to get help from one of them, be they old friends like Jim Korkis, JB Kaufman, or Michael Barrier, or new contributors like John Culhane, Alan Coats (Claude and Evie Coats’ son), Theo Halladay (Sylvia Holland’s daughter), Julie Svendsen, or John Debney.
There is one catch, however. I would really like to be able to visit every single one of the known creative planets and I know this will not happen. Granted, day after day, I get access to more fascinating documents, but through this ongoing process I am also bound to learn of treasures that have been irretrievably lost. Such is the case of the autobiographical tapes of Hal Adelquist (head of the Story Department from the mid-‘50s on); of Eric Larson’s notes for his planned autobiography, 40 Years at the Mouse House; of Jack Speirs’ autobiography; of some of Bob Thomas’ interviews with Disney artists, family members and friends. And on it goes.
All the more reason for me to remind you of one key message: If you know Disney “old-timers,” Disney artists’ heirs, or Disney historians that I have yet to approach, please put them in contact with me. Every bit helps and leads to new discoveries; every initiative ensures that key documents will be preserved and shared.

My greatest joy, while introducing this new volume of Walt’s People, is to be able to welcome back my Disney history mentor and friend, Paul F. Anderson. The joy is particularly intense since Paul and his family had been fighting life-threatening diseases for the last three years and finally won.

You may have noticed that most of the past volumes of the Walt’s People series contained a thematic keystone: World War II in Volume 3, Dick Huemer in Volume 4, live-action productions in Volume 5, sound effects and character voices in Volume 7.
Volume 8 tends to focus on a few key Disney women: From Walt’s sister Ruth to story artist Sylvia Holland, animators Retta Scott and Retta Davidson, Imagineer Harriet Burns, and two of Disney’s most memorable secretaries, Tommie Wilck and the formidable Dolores Voght.
Volume 8 is also notable for containing the last of the surviving interviews conducted by Richard Hubler for his aborted biography of Walt. If you enjoy interviews that focus on Walt himself, you are probably already looking forward to Walt’s People – Volume 10, which will be entirely dedicated to Bob Thomas’ interviews.
And to calm your anxiety, thanks to Disney Legend Dave Smith, we invite you to meet Walt’s sister Ruth Disney Beecher immediately.

can't wait to get my copy !

Please, let us know when it will be available through Amazon.

Fantastic. Looking forward to it.

Looking forward to it.