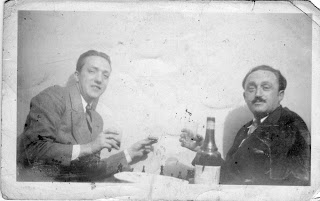 I have been in contact for the last few days with Lars Emanuelsson who recently completed the manuscript of an in-depth biography of Gustaf Tenggren (not plans yet regarding its release in book form, let alone in English). Lars, who runs the Tenggren web site I mentioned a few days ago, sent me yesterday the following email:

[I'm enclosing a fun youth image of Gustaf playing chess, probably with an unknown artist collegue. The picture should be from around 1920 – 1922. He might be around 25, just arrived in Cleveland from Sweden. It's not common to see him smiling later on. It would be interesting to know who his friend is...]

Any idea of who the other man might be?