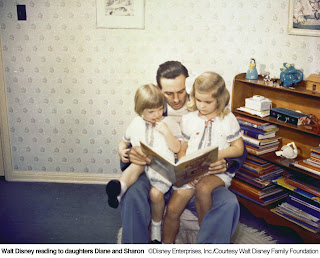 This just in through Andy Wang, Communication Manager of the Walt Disney Family Museum:

[As you may have heard, The Walt Disney Family Museum will open October 1, and its website (http://www.waltdisney.org/) goes live on August 1 – when tickets will go on sale!

That’s all in the future. For now, we’re delighted to announce that the museum’s Facebook page is up and running – and we’ve started a Twitter stream as well! You can find them at:

The Facebook fan page has tons of information – museum hours, ticket prices, directions to the museum, links to articles already written about the museum, community discussions, and more. Our Facebook page is pretty new – please feel free to join and spread the word by linking the page to any blog posts you may write. And when we see especially interesting press or blog coverage, we’ll be linking to the stories and posts from our page, as well. 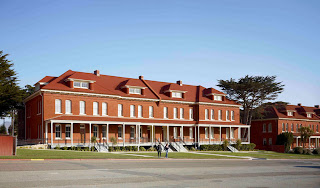 To keep things fresh and exciting, starting today, July 16, we’ll be launching a series of sneak peeks into the museum’s collections and galleries. The previews—which will be sent to you every Thursday until opening day, October 1—will talk about Walt Disney himself, his innovations, and his unending commitment to creating the best. They’ll also include photos of some of the amazing things you’ll be able to see at The Walt Disney Family Museum in person beginning in October. 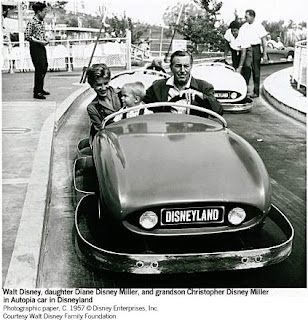 “My father's name is probably one of the most well-known names around the world, but as the ‘brand’ or trademark has spread, for many, the man has become lost,” said Diane Disney Miller, one of the Museum’s founders. “We are committed to telling the story of Walt Disney’s life, in his own words, and in the words of others who knew him well and worked with him. My father was very open and approachable, and in many conversations and interviews that were captured in audio, you will be able to hear in the galleries as you learn the story of his life. It is a wonderful story. Dad himself loved to tell it. Thanks to the amazing work of many dedicated people, we are fortunate to be able to tell it here using the tools he worked with—art, music, film, and technology—to present an honest yet affectionate portrait of this amazing artist and man.” 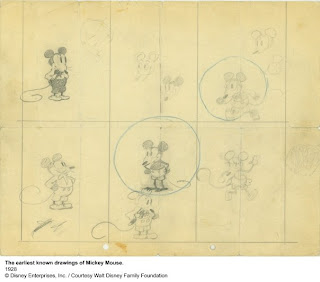 “From Steamboat Willie to Pinocchio to EPCOT, Walt Disney’s unyielding ambition was to ignite a sense of wonder and to enrapture audiences through great storytelling,” said Richard Benefield, founding director of The Walt Disney Family Museum. “He recognized the power of art to spark the imagination, and time and again, pushed himself and his companies to the breaking point as he pursued the highest level of excellence in feature animation. The Walt Disney Family Museum will present the compelling story of his life—of his successes and failures—as he entertained and enlightened the nation while it struggled with the Great Depression, joined the fight of World War II, and entered a golden age of prosperity and preeminence.”]
Posted by Didier Ghez at 12:53 AM

I've never seen those "earliest known drawings of Mickey Mouse" before. Fascinating stuff! Minnie's on there too, as well as a horse shoe which suggests that these may have been drawn with the idea for "Plane Crazy" already in mind.