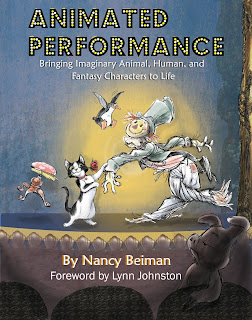 This just in from Nancy Beiman who is working on her second book:

[The book is called ANIMATED PERFORMANCE. It is about acting for animators--the first time this subject has been covered by an animator, not a stage actor--- and it will contain some Disney material, though it is not about that studio per se.

My Art Babbitt interview (the best one I ever got) will appear in its entirety, excerpted in the text through the book and not in a separate appendix as in PREPARE TO BOARD! I also have interviews with Ellen Woodbury, Woolie Reitherman, and Ward Kimball (the last two are excerpts only, but all contain fascinating material that isn't found elsewhere.)

A special bonus: an interview with my former student Jamaal Bradley on directing and acting for video games. This is a real treasure. I'm doing about 140 illustrations myself.

Publication is July, 2010, and AVA Press is the publisher. It's a large format book, too, much more elaborate than PTB.

Here is a rough cover design. It will probably change a bit through editorial, but this is the artwork I want to use.]

I'm looking forward to "Animated Performance." Nancy did a great job on her last book.