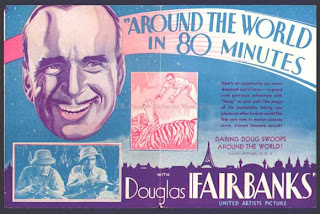 While I was in training last week, Mark Mayerson posted a fascinating "discovery" on his blog. We knew (thanks to JB Kaufman's seminal article on the subject) about the sequences created by Walt for other studios in the '30s: one in Servants' Entrance, the other one in Hollywood Party, but I had never heard about the one that can be seen in the travelogue Around the World in 80 Minutes by Douglas Fairbanks.

Here is what JB Kaufman could tell us about the sequence:

[I had wondered about this insert for a long time (sorry to say I didn't know about it at the time I wrote that "Before Snow White" article). So last year I screened it at the Library of Congress. Up until then I would have been willing to believe it was just a clip from an existing cartoon, but it's not; it's a special scene created just for the Fairbanks feature. This is evident for several reasons, but partly because the music, which starts in the preceding live-action scene, continues uninterrupted through the cartoon scene and Mickey's dance is synchronized to the rhythm of it. Also because he makes a point of imitating the hand and arm movements of the real dancers, on which Fairbanks has commented during the preceding scene.

Basically, it's a long pan; Mickey enters from a doorway at screen right, moves across the screen toward the left, and after an interval turns and dances back the way he came. His moves in the first half of the pan are imitations of the Siamese dancers; on the way back he's all American, with moves borrowed from the Charleston and other American dances. The whole thing is one uninterrupted take. It runs 53-2 in the LoC print, and Mickey's appearance looks to me very much like Dick Lundy's drawing. Of course that would make sense because it's a dance scene, and Lundy came to be the dance specialist on the Disney animation staff.

This scene is an intriguing rarity, but I wouldn't go so far as to call it a mystery. It's certainly no mystery why Walt would respond to a request from Fairbanks; at this time Fairbanks and Mary Pickford, if no longer the king and queen of Hollywood, were still very close to it, with a popularity and influence far exceeding those of any movie stars today. The fact that they were taking notice of Mickey is one more testament to how quickly he had become a popular phenomenon. No one would blame Walt for taking some pride in the attention he was suddenly getting from Hollywood royalty (don't forget the portraits of Doug and Mary that turn up in The Wayward Canary and the Fairbanks caricature, among dozens of others, in Mickey's Gala Premier).]

This is a good start, but I have not finished investigating this intriguing subject.
Posted by Didier Ghez at 5:35 AM

The mystery is why the clip isn't better known and why Disney didn't include it on a Disney Treasures DVD (either one of the Mickey sets or the Rarities set).

I thank Didier and J.B. for the additional information and look forward to anything else they can contribute on the clip.

Wow. I would like to see this clip on You Tube. Speaking of it I´m trying to find and upload a very short clip of Walt Disney in a event during his trip to Brazil in 1941. :-)

I think I know what David Gerstein's going to watch on his next MOMA trip!