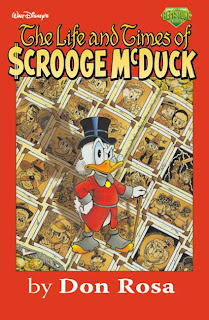 This press release just in thanks to Mark Sonntag:

“Boom! Studios has landed the license for Disney’s standard characters, which for several years found their home with us at Gemstone Publishing. I want to personally congratulate Ross Richie, Andrew Cosby, Mark Waid and their team on picking up these great characters and titles,” said Steve Geppi, President and Chief Executive Officer of Gemstone Publishing. “I think the whole industry has observed their initial successes with their Boom! Kids line with great interest, particularly the immediate sell-through on The Incredibles #1, The Muppet Show #1, and Cars #1. It would be exciting to see Walt Disney’s Comics & Stories and Mickey Mouse and Friends, as well as any subsequent titles, follow in similar form,” Geppi said. “When Gemstone took over the license, the standard characters had not appeared in American comics in four years and I firmly I believe that we paved the way back into the market for them,” he said. “We had some notable successes, both in terms of critical acclaim and sales, particularly with The Life & Times of Scrooge McDuck. While I am of course disappointed that I won’t be the one publishing these great characters anymore, I believe the future for them is still one of untapped potential.” Gemstone’s Disney back stock presently remains available from the company and from Diamond Comic Distributors.]