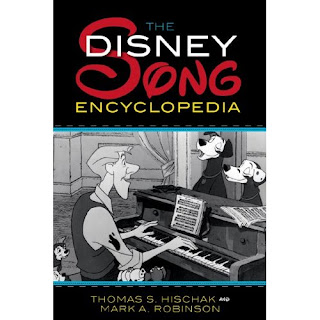 Here are two upcoming books discovered by David Peake on Amazon and that I am really looking forward to getting:

The Disney Song Encyclopedia by Thomas Hischak and Mark A. Robinson
[This book describes and discusses over 900 of the most famous and not-so-famous songs from Disney films, television, Broadway, and theme parks from the 1930s to the present day, and does so in great detail to determine exactly what it is that makes them so memorable. It includes a glossary of song terms, a list of all the Disney songs and their sources, a songwriter's directory in which every song by each composer/lyricist is listed, a bibliography, a guide to recordings and DVDs of Disney productions, and an index of people and titles.]

[The "Beauty and the Beast" legend has a universal appeal; the fairy tale exists in numerous versions throughout the world. In the West, it's best known from the 17th and 18th French versions, which Walt Disney considered animating during the late 1930s. Disney gave up on the idea, as he felt the original story was too claustrophobic and lacking in action.

Reapproached in the 1980s, Beauty and the Beast had several false starts. It was originally conceived as an 18th century period piece, directed by the British husband-and-wife team of Richard and Jill Purdum. After some changes, two new directors, Kirk Wise and Gary Trousdale, were put in charge of the project. Although he was initially reluctant to do another animated film after The Little Mermaid, the late Howard Ashman came on board shortly after the new directors. Over many months, the characters and story gradually took form, but there were many changes, false starts and wrong turns. Sequences were created, reworked, cut and added as the film gradually emerged, like a statue from a block of marble.

After all the ups and downs, Beauty and the Beast was released in 1991 to rave reviews and record-breaking business. The film was widely hailed as a technical and aesthetic breakthrough and remains the only animated feature ever to be nominated for the Oscar for Best Picture. This authoritative book will feature interviews with artists, executives, and voice actors; and transcripts of meetings and story sessions. Illustrations will abound throughout, including sketches, caricatures, sequences of animation drawings, and preliminary artwork from discarded sequences. This book will be a must-have for any fan of the "Tale As Old As Time."]
Posted by Didier Ghez at 5:39 AM

The Disney Song Encyclopedia, if done right, has the potential to be a great book.

Beauty and the Beast, on the other hand...I know I'm in the minority her, but I strongly believe this is one of the studio's poorest animated features. I'm amazed so many people still consider it, as PR told us at the time, a masterpiece.

Boringly a BatB fan, I am very excited. The closest thing to a "making of" or "art of book" was "The Art of Animation", whose second section was entirely dedicated to BatB. My only fear about the new book is that it would just be the same taxt, maybe with more pictures. No author is listed on Amazon, do you have any additional info?

Two books to look forward. But I would like to know the author for the Beauty and the Beast book!