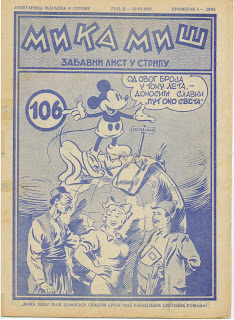 By far, one of my favorite covers of the Serbian pre-WWII Mika Mis magazine is the one pictured above.

Mickey says: "In this issue, and all through the summer, we publish a famous Travel Around the World." It's an announcment of a new series of comics, to be published in Mika Mis, the story made by cartoonist Djuka Jankovic, who did his strip after the famous satirical novel (Travel Around the World) by Serbian writer Branislav Nusic... It's actually based on the popular novel Around the World in 80 Days, but with characters from the Serbian countryside travelling around the world of the early 20th Century...