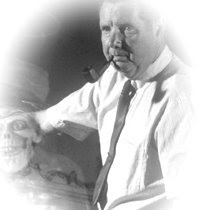 This just in from Jim Korkis:
[Yale Gracey was one of those many Disney Imagineers who passed away before he got to be interviewed extensively. Imagine my surprise when I was paging through a coverless copy of the magazine "Famous Monsters of Filmland" from 1970 that was covering the then new Haunted Mansion at Disneyland and found that the writer had talked to Yale about the project and here are the only words I have seen of Yale talking about the mansion:

“Often I simply don’t know that something couldn’t be done. I would develop a concept and gather various gadgets and materials and keep trying until it worked. When we built the illusions we were surprised to find how effective they actually were. People enjoy being frightened but we couldn’t make the attraction too scary because of the droves of children that would be coming. We decided to add the element of comedy. It’s like adding a wink of an ey e to the end of a ghost story. Someday I would like to design a real scare house. Some of the illusions that weren’t used in the Haunted Mansion would send chills through anyone I know."]
Posted by Didier Ghez at 3:51 AM