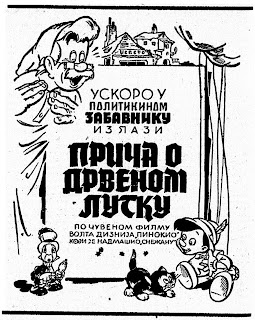 This just in from Sasa Rakezic in Serbia:

[I'm enclosing here an article from Politika daily - it was published on March 10th 1940, and it speaks about the release of Pinocchio and its success in the US. It was also announced in an ad (above) in that very same issue that Politikin zabavnik (a magazine which is Politika's spin off) will soon start to publish a Pinocchio comic strip. The article starts with: "Mickey Mouse with his partner Minnie and the army of characters has slowly and painstakingly conquered all the continents. But it took years before the world accepted comics and animated cartoons". The article also speaks about the universal appeal of Pinocchio, a fable that was written by Colodi, but is based on a fable that exists in many countries, including Serbia, where it's called "a tale about Neposlusni Ćira (Naughty Chira)".] 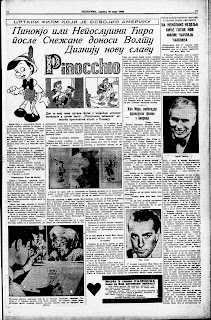