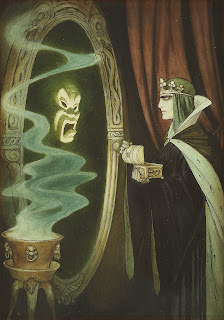 This just in from Gunnar Andreassen:
[This concept artwork was sold by Heritage Auctions last week for $26.290.

This stunning example was created as concept artwork for the movie Snow White and the Seven Dwarfs, and as one of the most impressive images ever related to the animated feature, was also later featured prominently in the Snow White children's book, published by Grosset and Dunlap, 1938.

The image is breathtakingly detailed and the colors are vibrant and wonderfully preserved, representing the single greatest rendering of the villain from the movie that completely changed the trajectory of animation in America. As such, its importance cannot be overstated.]
Posted by Didier Ghez at 4:03 AM

What a fantastic image! For some reason, I have always loved the way the magic mirror figure was drawn/colored. Interesting that the face of the Evil Queen looks more like that of an Evil King in this concept.