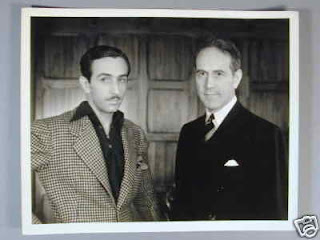 Two interesting photos of Walt found on ebay today. The caption of the one above reads:

[A YOUNG WALT DISNEY POSES WITH THE THEN BRAZILIAN AMBASSADOR OSWALDO ARAHHA IN THIS 1943 PHOTO DURING WORK ON THE DISNEY SOUTH AMERICAN FEATURES.]

[In fact, the photo of Walt and the Brazilian ambassador was taken in his Hyperion office, probably around 1935.] Of course I should have recognized this (if not the date)!

The caption of the one below:

[WALT DISNEY POSED FOR THE GREAT CANADIAN PORTRAIT PHOTOGRAPHER YOUSUF KARSH FOR THE COVER OF THE DISTINGUISHED "WISDOM" MAGAZINE, A 1950s HARD COVER MAGAZINE. OFFERED HERE IS A PHOTO OF WALT WITH THE PHOTOGRAPHER AND HIS WIFE SALAUGE IN 1957 DURING THE COVER'S POHTO SESSION FOR THAT YEAR'S ISSUE.] 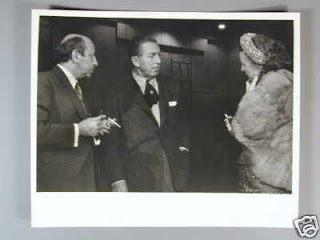