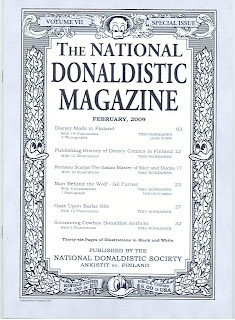 Those of you who know me well are aware of my fascination with the history of Disney outside of the US. The fact that I have lived all my life in Europe and Latin America has a lot to do with this, of course. Unfortunately, until a few years ago little had been written on the subject. Frankly there are still huge gaps to be filled, but things are getting better.

Want to read about Disney in Italy? Pick up I Disney Italiani by Luca Boschi, Leonardo Gori and Andrea Sani released in 1993. About Germany, get Im Reiche der Micky Maus by Storm and Dressler (1991) or Wie Micky unter die Nazi Fiel (1992) by Carsten Laqua (to be released this year in English by Hermann Press). France has the book Happy Birthday Mickey! by Michel Mandry (1984). For Brazil you will have to wait for Celbi Pegoraro's book on the subject; and for Spain and Portugal you will only need a few more months to discover Jorge Fonte's historical research in book form.

Quite a few of those books exist only in their local language, unfortunately, but they all bridge huge gaps in our Disney history quest. Alberto Beccatini's, David Gerstein's and my work for Tomart's Disneyana Update also help with this very same quest.

But there is always more to learn. Which is why The National Donaldistic Magazine just released by Timo Ronkainen in English, is such a treat. I had wondered for years about the presence of Disney in that country before, during and after WWII and the first two articles in the magazine (Disney Made in Finland and Publishing History of Disney Comics in Finland) fill that gap beautifully (although I have a feeling that some more research on the subject is needed) . Frankly, those two pieces were the highlight of the magazine and justify its cost alone. The articles about comic-book artists Romano Scarpa and especially the little known Gil Turner were an added bonus that delighted me.

In other words, can't wait for more content in English by Timo Ronkainen.

I also hope that someone else will take a similar initiative regarding Norway, Sweden and Denmark. This is still virgin territory for me, still unexplored areas for our quest.
Posted by Didier Ghez at 12:39 AM

Your fascination is fascinating Didier. Being from Brazil, I share it with you. When Edgar, my brother, watched with me the movie "Walt and El Groupo" he wanted to ask Ted Thomas what he thought about it in the end, but there was no more time. Love of Disney in Brazil is more than "magical". Disney characters, still today, decorate even adults' store windows there. Somehow,they give one such a feeling of liberation. I was surprised here in the US, in knowing many middle class kids that have never been to a Disney park and are OK with it, whereas in Brazil such a visit is almost a rule. If one hasn't been to Disney, one kind of hasn't been "born" yet. At least in RIo, where I come from.