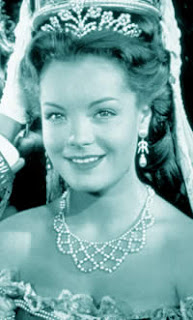 This just in from Sebastien Durand:

[Romy Schneider was a big star in in Europe (and remained so until her untimely death). While she toured the US to promote her film about Queen Victoria’s Young Years (or The Story of Vicky as it was known there), she visited Disneyland (I have not been ablo to locate pictures of it). Apparently, there were talks at some point of her appearing in Third Man on the Mountain. But she wanted to get away from the saccharine image she had at the time (her three Sissi movies about the life of Austrian Empress Elisabeth had been a huge hit), requested many changes to her character and a star treatment that the studio was not willing to grant a European actress. Talks broke and the role went to Janet Munro instead.]

As much as I worship Walt Disney, his memory, and the films he left us, I'm glad she went away from her saccharine image, in view of what she became. It's a good thing she did not appear in any Disney live-action feature.