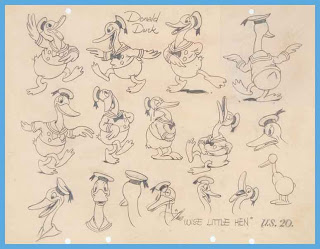 As you all know, Donald was officially born on June 9, 1934. Or was he? This just in from Gunnar Andreassen:

[Enclosed you'll find two news clippings from December 19th, 1933 about Walt Disney getting medal and a daughter on the same day: December 18th. In the article from the Los Angeles Times: "Walt Disney Gets Medal and Daughter Same Day" there is also mentioned that there was entertainment for the guests, ”performed by the members of the Disney organization, including Donald Duck, Clara Cluck, and members of the Rhythmette Trio who sang as the three little pigs." 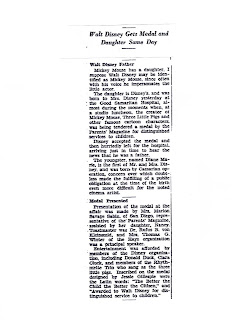 In the New York Times under the headline: "Child to Walt Disneys" there is not written anything about the entertainment. 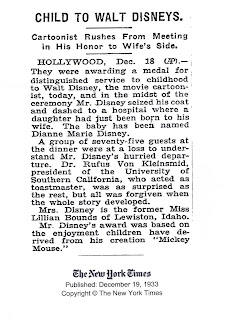 My guess is that Donald Duck was first ever mentioned to the press in this Los Angeles Times’ article. Clarence "Ducky" Nash had been employed by The Disney Studio on December 2nd and perhaps this was his first assignment as the Duck. He probably didn’t have the Duck Doll at this early stage of Donald’s career, but just used his voice.

Florence Gill could have performed as Clara Cluck, as she had the voice for the Wise Little Hen.

Since Walt got his medal from the Parent’s Magazine, I would think that they brought an article about this ceremony in one of their first issues of 1934, but this I haven’t found.]
Posted by Didier Ghez at 3:46 AM

Que Coisa Fofa the Donalds! I think the Brazilian slang "fofo" or "fofa" is so good for Disney creations! Some times better than "cute"