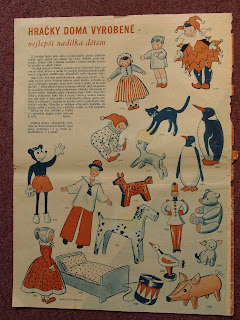 This just in from Sasa Rakezic:

[I'm sending you the page from a magazine sent by a friend from Prague. The magazine is called Hvezda (Star), published in Prague in September of 1943. The article is actually made as an instruction to parents about creating hand-made toys for their children, which obviously was important to know during the war time. Among the other toy models, there's obviously a Mickey. Again, it's strange that Mickey Mouse appeared in a magazine published during the German occupation!]