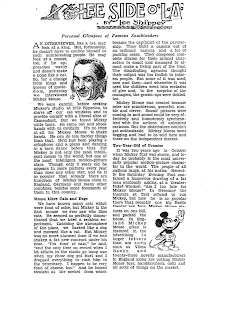 [Enclosed you’ll find another early drawing of Walt. It’s from an article in Los Angeles Times, Nov. 30th 1930. It has probably not seen the light of day for almost 80 years. I wouldn’t call it a caricature, even if his eyebrows seem a little exaggerated. I have also enclosed the whole article - it was so long that I had to cut it in two to be able to scan it.

It also contains a very important interview with Mickey Mouse - who was two years at that time. He tells the reporter that at least one branch of his family came from Germany (Hamelin, or Hameln in German):

"My quadruple great-grandparents were the one pair of mice to escape the Pied Piper of Hamelin. To to that they had to learn to do many wonderful and difficult things. That hereditary lore is the prized possession of my family. I am able now to do anything of which a good artist can draw a picture.”

I guess that there is no reason to doubt his story. It seems clear that some of his forefathers must have been immigrants to the U.S.A. !] 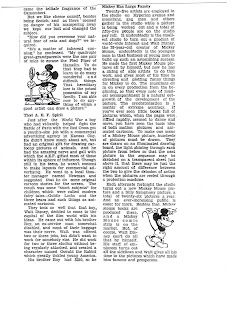 You are right, Didier, the drawing of Walt is not a caricature. But for me, it doesn't seem to be a "serious" drawing either (one with a good similarity to the model).