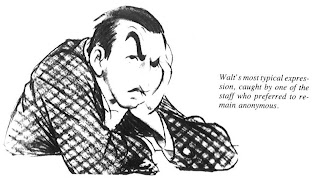 [Enclosed: Two more caricatures of Walt. One of them is very well known and probably one of the best (above). Anyone who could make a guess at the artist that drew it ?

The other one (below) - recently sold on ebay - is described as drawn by Kopietz (drawn sitting on Walts shoulder), but I would think that Carl Barks was the man behind this drawing. 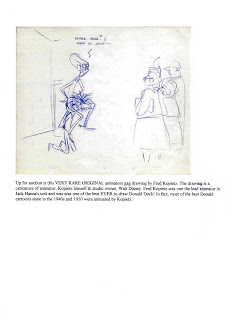 Finally here is a photo of Walt and Kimball with two caricatures of Walt on the wall. Kimball was appearantly not afraid of showing them to Walt. I would really have liked to view a better version of the drawing of Kimball and Walt in WD's office. 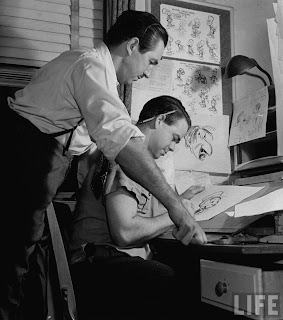 I'll check my files, I've seen a caricature like that somewhere.

Not Barks. Too many sharp corners in the drawing. All Barks' pencil sketches (there are plenty of them on the net now) are loose, a bit "round" and always quite appealing in that late 30s story sketch mode. Those angular, straight-line, rubber hose legs sharply folded at the knees are entirely foreign to his style. Barks' sketching is usually more confident than this, he knows where he's going and doesn't need to retrace straight lines. Also the guy's eye, a simple dot, looks more "modern" and sophisticated than what Barks would draw.