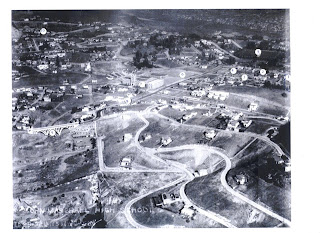 [Enclosed you'll find an aerial photo of the Franklin Hills - Los Feliz area in LA from 1932.

I have numbered some places in this photo that are of interest:

1. The Walt Disney Studio. Unfortunately most of the buildings are just outside the photo

6. Football field. This was used in the ending sequence of "Grease". For a funny story: see page 78 in Jack Kinney's book: Walt Disney and Assorted Other Characters

7. John Marshall High School, built in 1931. Can be seen in the background of several studio photos. It has been used in a lot of movies and TV-series.

10. Walt's house in 4053 Woking Way - built in spring/summer of 1932. I'm not sure of the exact place of this - or if it was built when this photo was taken. There are still a large number of lots that have no buildings.

A better version of the photo can be found here.]

That is simply amazing.

Puts a lot of things in a better context when thinking about Hollywood and the early days of the Studios.