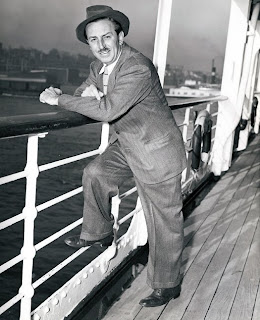 - Where's Walt, No. 4A by Michael Barrier
- The Walt Disney Family Museum site has been updated
- Lots of new posts by David Lesjak on Vintage Disney Collectibles

In 1934, Disney's staff grew to 187, which is when he hired Milt Kahl, Frank Thomas, Marc Davis, Ward Kimball, and Ollie Johnston, among others, to lead the staff of new young animators. Also, he put Don Graham in charge of training in their makeshift "school", where the idea might have spread that footage from Martin & Osa's travels were used (since they were producing films around that time).

Still, during the initial production of Bambi, Disney needed realistic representations of animals on screen, so he hired noted painter of animals, Rico LeBrun, to lecture on the structure of animals and how they moved, and sent cameraman Maurice Day to shoot photos of wildlife in Maine. Also, the Maine Development Commission provided 2 live fawns for the animators to study as they grew. Later, other live animals were added to the studio, and a local naturalist contributed hundreds of photos of animals in action. This implies that this is the first time Disney relied on "real-life" subjects in animation training, so maybe the Johnson's films were never used earlier.

Of course later, during the Tru-Life Adventure development is when Disney used Alfred & Emma Milotte's Alaska film, and later Paul Kenworthy & Robert Crandall's footage - but again, no mention of the Johnsons.

Using the Johnson's films for animation practice makes sense, but I don't see any mention of it. Let me know if anyone finds anything else.

The above response was intended for "question for readers of this blog" post. Please change it if possible.